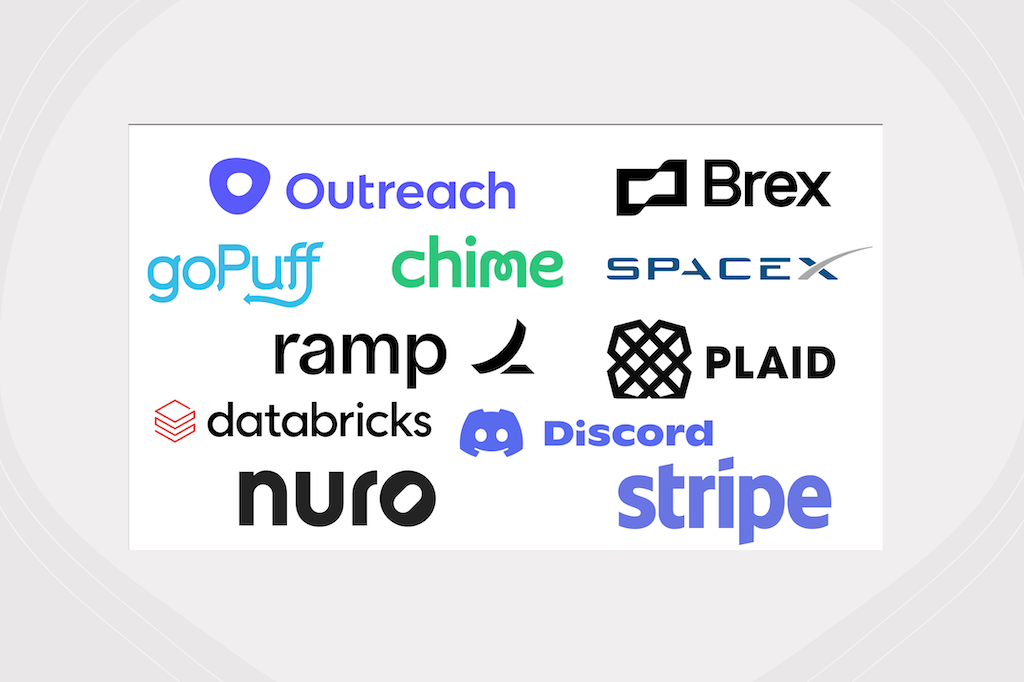 Negotiating Salaries at Startups like DataBricks, Chime, Brex, and more

If you have additional questions, or just want to make sure you get the highest possible compensation, signup for a call with our negotiation team.

The Benefits of Working at a Unicorn

There has been a steady rise of mega unicorns in the last five years. There are currently 186 unicorns (private companies valued > $1B) and many of them are worth over $5B (a mega unicorn). In today's hyper growth market, these are exciting companies to join because the market has validated the upside opportunity and there is significantly less downside than an early-stage startup. At the unicorn stage, companies will have typically built out role levels, structure, and compensation plans to provide a clearer path for potential career progression, while avoiding much of the infamous FAANG bureaucracy. Many engineers we've helped report faster pace of  learning and growth in these companies.

It used to be that to join pre-IPO companies, you had to be willing to take a medium-term pay cut. Fortunately, that is no longer the case and many of these companies offer industry-leading compensation packages.

There isn't a status quo on mega unicorn pay. Their pay bands are largely based on:

How do unicorn startup salaries compare to FAANG?

Databricks and OpenAI pay very competitively and will compete for the best talent in the market – with the right leverage you can be paid more than FAANG.

Compared to Databricks, SpaceX salaries and equity are almost 50% less; Brex and Stripe also pay less but their pay bands have less variability (i.e., the difference between a standard and top of band offer at Stripe is relatively narrow).

With the exception of companies like Databricks and OpenAI, who are competitive with the highest paying companies, you can expect a unicorn startup to pay similarly to Amazon and Google but worse than Facebook and Netflix. However, if you believe in the future of the company, the growth potential can easily offset the value of your initial salary.

You can't negotiate your compensation until you understand the potential components of an offer. Each mega unicorn has a different structure. If you have multiple offers, you want to make sure that you compare "apples to apples".

Some companies have very unique elements:

As unicorns turn into mega unicorns, the way they give out equity changes. There are three broad ways that startups compensate with equity: NSOs, ISOs and RSUs.

NSOs and ISOs have different tax implications, but they are fundamentally different types of stock options, which require you to pay a strike price to purchase shares. Therefore, the simplest and most accurate way to value out your options at the company's current valuation is [(preferred price - strike price) * # of options], but there are many other nuances which you can read about here. In comparison, RSUs are shares; you don't need to worry about factoring in a purchase price.

There is no hard and fast rule on when companies flip from giving options to RSUs. For example, Nuro's last valuation was $5.2B, which makes them large, but they still grant ISOs. Brex switched from options to RSUs during their last funding round, which valued them at $7.4B. This switch can be messy for ongoing negotiations. However, if done correctly, you can negotiate excellent terms. For our ongoing Brex negotiations, we were able to secure options at the prior valuation when they switched over to RSUs.

Most startups, including mega unicorns, have cliffs associated with their equity grants. If you leave the company before the cliff, then you won't receive equity. The most common cliff is one year and it is rare to see a cliff that is longer than one year. In contrast, many FAANG companies have removed their equity cliffs, which means you start vesting when you start.

To give you a better idea of vesting schedules:

A short aside on Stripe's equity offer:

Stripe recently changed their equity plan from a multi-year package to a one-year equity grant. This new equity plan is, generally speaking, worse for you. We could write a whole essay on why it's suboptimal, but for now, here is a short example:

Now what happens next year? The trick is that Stripe's share price could have gone up or down during the year; subsequently, the number of RSUs that you will get will change each year - even though the nominal value will remain constant. So if the share price doubles, then you would only get 512.5 RSUs the next year (i.e., the equity you earn in year 2 does not benefit from any stock appreciation in year 1). The good thing is that if Stripe does poorly and has a down round, you will get more RSUs than the year before, but few people join a mega unicorn to mitigate their downside. In this model you have equally mitigated your upside because you won't get to lock in 4-years of equity at the current share price. Provided that the company you choose has substantial growth over four years, this is a major difference in total compensation compared to GoPuff, Chime, Databricks, Ramp and Brex, which all allow you to lock in stock options / RSUs at today's share price.

Refreshers are new equity that is given to you each year so that your total compensation rises. Generally speaking, they vest on a similar schedule to your initial grant. So, if your initial grant had a 4 year vest and one year cliff, your refresher will be the same.

Many mega unicorns don't give refreshers. They hope to retain you over the first four years via the increasing value of your equity, tied to the startup's valuation.

However, to compete with FAANG and to ensure that you stay beyond 4 years (when your initial equity grant runs out), some unicorns have started giving refreshers:

Companies may deploy policies, like stock buybacks, that allow them to retain more ownership and/or provide employees with more liquidity:

In contrast, Discord and Plaid don't give annual bonuses. With Plaid's $13.4B valuation, it is likely that they will consider adding annual bonuses in the near future to compete with FAANG for talent.

This entire set of companies has widely differing policies for signing bonuses.

For example, strong offers at Plaid will include moderately-sized signing bonuses (e.g., $50K). For new grads, a good offer will include a $25K signing bonus. For remote roles (even senior ones), they often try not to give signing bonuses. Don't be thrown off. With a well executed negotiation, you can add one to your offer.

So what does the negotiation process look like at companies like Plaid, Brex, Stripe and Databricks? The short answer is that their policies are changing rapidly. As a rough rule of thumb, each time they raise a round, there will be a significant change to compensation bands and their negotiation process.

For example, as Brex "grew up", they added in a compensation team that helps to standardize offers, giving recruiters and managers less control over your offer. They are still small enough that when they "need approval for special circumstance offers", they will speak directly to the founders. However, Stripe is so large that they have a centralized compensation committee for all of their global offices. Whether your offer is for Singapore or Canada, the compensation decisions are funneled through the US compensation team.

Expect recruiters at most of the mega unicorns to give you deadlines. In almost all cases, the deadlines aren't firm and can be negotiated – being upfront early on about your timeline will make this significantly easier. In some cases (e.g., at Brex), they will want you to make a decision within a week of giving you the offer. The easiest way to manage Brex's timeline is to ask them to wait before giving you a first offer.

Unfortunately, as several mega unicorns have matured, they have tried to adopt "no negotiation policies". Stripe is best known for this. Despite the broad claims we've seen in media, we have had a 100% success rate increasing Stripe offers, regardless of location or seniority. The negotiations are much harder and the increases are smaller, but they do still negotiate.

Leveling is more complicated than it should be. Unfortunately, there isn't one consistent scale. Some companies start new grads at L1, others at L2, and, most frequently, at L3. When you are talking to a company, you should always ask what level you are interviewing for and ask to understand the leveling hierarchy. It is okay if a recruiter says you are between two levels and that it will be dependent on your interviews, but it is unreasonable for them to withhold all leveling information.

Many mega unicorns now have split levels; for example, Stripe Senior has 3a and 3b, and each have different salary ranges.

The role levels at Databricks are good to use as a point of comparison. Their leveling is very similar to Google:

One worthwhile note is that few of the mega unicorns have IC roles that are as senior as the distinguished engineering roles you would see in FAANG – this is largely because the scale at FAANG creates a deep set of challenges to tackle.

It's important to remember that work life balance is fundamentally team specific. There are people who work weekends at Chime – despite Chime being known for great WLB – and there are engineers that have great WLB at Discord, despite Discord being known for an intense culture. Your team and manager will have the single biggest impact on your WLB.

If WLB matters to you, then you should try talking to other engineers on the team. If it is a make or break, then asking early can save you time going through the interview loop. On the other hand, if you are more flexible, you should wait until you successfully complete the interviews because this is when you have the most leverage. Collaborative discussions with your recruiter can help you find a team that is a good match. Ultimately, they want you to sign as well.

Caveats aside, different companies are known for different cultures. Let's walk through them at a high level:

Choosing to Work at a Unicorn Startup

So how do you pick between great companies like Databricks, Brex and Ramp?

There isn't an easy answer. The value of your offer today matters a lot, but the long run potential matters even more. Make sure to stop and consider which unicorn you truly believe in. While picking winners is hard, what you can control is picking a team you are excited about and that you will learn from. By leading with the company and team you are passionate about working with, regardless of the startup's success, you will set yourself up for excellent future career opportunities.

If you have other questions about negotiating with these startups or you want to make sure you aren't leaving money on the table, book a call with our negotiation team.